Diabetes is a chronic disease in which the body either does not produce Insulin, a hormone which regulates blood sugar level, or uses it efficiently. The number of cases of diabetes is increasing dramatically in India and is spiraling out of control. India’s diabetic burden has more than doubled between 1990 and 2016, with the total number of cases increased from 26 million to 65 million. India is becoming the diabetes capital of the world. If not managed or controlled, diabetes leads to various other complications including, heart disease, retinopathy, nerve damage, kidney disease and stroke. It is a reason to worry that around one-eighth of the Indian population is suffering from this lifestyle disease. Kolkata, Surat, Bhopal and Ahmedabad have the highest number of diabetic patients. At the same time, these cities also contain a higher number of people aged above 45 and live a sedentary lifestyle. The prevalence of diabetes in India has increased 10-fold in the last two decades, doctors say and the number of diabetics is expected to double over next 25-30 years. Racial predisposition, urbanization, change from traditional healthier diets to those high in sugars, refined carbohydrates and fat, and sedentary lifestyle have contributed to the steep increase in the prevalence of diabetes in India. 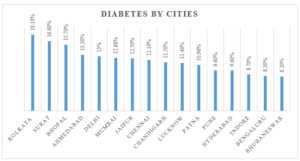 Chances of diabetes rise with age

There are three types of diabetes: type 1 diabetes, also known as insulin-dependent diabetes were insulin is not produced by the pancreas; type 2 diabetes where the body is unable to use insulin; and third type is gestational diabetes during pregnancy where blood glucose level rises above normal but remains below those diagnosing diabetes. The cause of diabetes in India is multifactorial, ranging from genetic factors to environmental influences such as lifestyle change, steady urban migration and obesity associated with living standards. People aged 45 years and more are more prone to diabetes, as age increases the risk of type 2 diabetes. The chances of developing diabetes are high among seniors and adults at 36.82% and 23.81%, respectively. 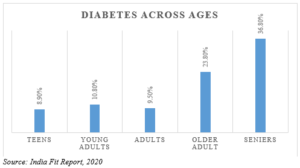 What is even concerning is that half of the diabetic population in India is undiagnosed, therefore, the actual number of diabetics is likely to be far higher than now. Hence, it is important to educate people and spread awareness to reduce further health complications caused by diabetes through early diagnosis. The most common symptoms of diabetes are: frequent urination, excessive thirst or hunger, fatigue and body pain, weight loss, numbness or tingling of feet and toes, and slow healing of wounds. Around 38% of people suffering from diabetes do not take medication and try to control diabetes by improving their lifestyle. However, those who have been prescribed medicine by doctors have been seen skipping medication, which can cause further damage. More numbers of men have been found to skip or avoid medication as compared to women.

Unruly lifestyle is a major cause of diabetes in India. It is not about family history only, doctors say – unhealthy diet of processed food is one of the reasons. Screening for the pre-diabetic condition is the primary way to diagnose this condition. People with family history, polycystic ovary syndrome (PCOS) and obesity should start preventive blood tests done from 35 year of age. To manage diabetes, doctors suggest reducing the intake of sugar, doing exercise regularly, drinking more water and avoiding eating large portions. Besides, avoiding smoking and alcohol, following a low-carb diet, and eating green vegetables are important.

The effect of diabetes can be reversed by changing lifestyle and a balanced diet – these are the more important aspects of diabetes treatment, and are complementary to the medication.